Chandeliers supports and raises money for various charities. Although we usually have one key charity a year, we will also raise funds for other charities and causes which are significant because they have touched the lives of our members in one way or another.

This year's charity is Square Pegs Arts which is an award winning Charity that runs Theatre and Arts groups and projects for children, young people and adults who have learning disabilities, autism, social communication difficulties or who struggle to ‘fit in’ with mainstream activities.

The Concert Party performed at the Memorial Hall in Bearsted in May 2018 and raised £300.00 for Dementia UK. 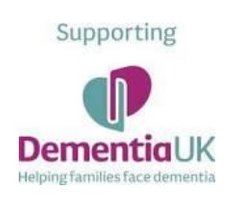 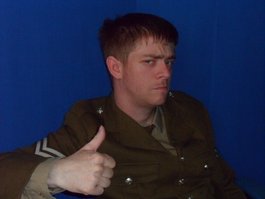 Click above to find our more about The British Liver Trust

Brett behind the scenes in "Blitz to Broadway" - he was enjoying himself I promise.

In 2016 the chosen charity was the British Liver Trust. Throughout this website you will see photos of one of our past members, Brett Baker. The reason that we have included photos of Brett is because it feels as though he is still very much a member of our group, and he is very much missed by all of us.

Brett was a popular and accomplished member of Chandeliers. He appeared in several productions including "Allo allo", “Blitz to Broadway”, “Much Ado About Nothing”, “Valiant Hearts”, “Robin Hood”, and his last role in 2016 as the Policeman in “The Lady Killers” even though he was very ill at the time and waiting for a liver transplant.

He also sang in the concert party and did so much behind the scenes including publicity and supporting social events.

For Brett's continuing legacy, and to keep his memory alive, his family is raising money to fund research into Primary Sclerosing Cholangitis (PSC) in the hope that, in future, more people suffering from this terrible disease will survive to transplant and beyond. Donating through JustGiving is simple, fast and totally secure. So far, over £5,500 have been raised for the British Liver trust in Brett’s memory. 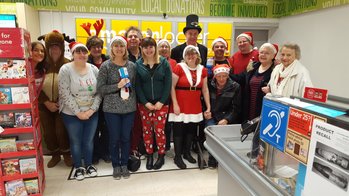 To find out more about Parkinsions disease, click the picture on the right

For two years in a row, the concert party has sung in the Chequers shopping centre, Maidstone for Marie Curie Cancer Care. Last year (2015), we raised the largest amount of money (£571) for our chosen charity, and as a result the Chequers added an extra £500 to the amount raised. This year (2016) we raised a staggering £894.85 in four hours of singing (despite several bad colds amongst the concert party, and once again the Chequers centre generously added an extra £500 to our total.

To find out more about Marie Curie Cancer Care, click the picture above 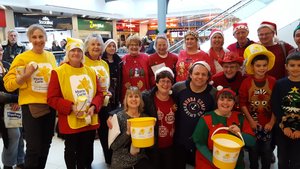