Past Productions and events

As Chandeliers has been producing good theatre since 1961, this page will be an ongoing exploration into the past, and it won't be possible to discover photos and posters from every production we've ever produced, however we do have a list all of our productions, and if you click on the information below each poster (if one is on display) you will be-able to see both rehearsal and or production photos associated with that show.

May – With Vacant possession by Wilfred Massey

May – See How They Run by Philip King

April – A Change of Air

April – Letter for the General  by Maurice McLoughlin

November – Laughter in the Dark by Victor Lucas

February – Barefoot in the Park by Neil Simon

November – The Bride and the Bachelor by Ronald Millar

November – The Prime of Miss. Jean Brodie by Jay Presson Allen (adapted from the novel by Muriel Spark

February – All in Good Time by Bill Naughton

November – I’ll Get My Man by Philip King

February – They Came to a City by J.B. Priestley

November – Uproar in the House by Anthony Marriott and Alistair Foot

February – A Murder has been arranged by Emlyn Williams

November - Dead Letter; The ruffian on the stair and Bermondsey by Joe Orton

December – Off the Hook by Derek Benfield

February – I Love you Mrs. Patterson by John Bowen

November – A Christmas Carol, adapted from the short story by Charles Dickens

February – The Anniversary by Bill Macilwraith

November – One for the Road by Willy Russell

February – Who Goes Bare by Leslie Darbon and Richard Harris

September – Beyond a Joke by Derek Benfield

February – Stepping Out by Richard Harris

October – Noises Off by Michael Frayn

March – Outside Edge by Richard Harris

May – Blitz by Lionel Bart

May – Music and Mayhem

February - A Chorus of Disapproval by Alan Ayckbourn

May – Move Over Mrs. Markham by Ray Cooney

October – A Christmas Carol, adapted from the short story by Charles Dickens

February – Man of the Moment by Alan Ayckbourn

May – Fur Coat and No Knickers by Mike Harding

February – Waters of the Moon by N.C. Hunter

May – The Opposite Sex by David Tristram

May – Unoriginal Sin by David Tristram

February – The Prime of Miss. Jean Brodie by Jay Presson Allen (adapted from the novel by Muriel Spark

February – The Corn is Green  by Emlyn Williams

May – Two and Two Together  by Derek Benfield

November – Oliver by Lionel Bart, adapted from the book by Charles Dickens

May – Slaughterhouse by Norman Robbins

February – Oh! What a Lovely War by Charles Chilton

May – Mr. Wonderful by James Robson

February – Annie, Get Your Gun by Irving Berlin

May – The Importance of Being Earnest by Oscar Wilde

When We Are Married by J B Priestley

Blitz to Broadway – a musical written and directed by Maria Watson

Much Ado About Nothing by William Shakespeare

The Hollow by Agatha Christie

The Vicar of Dibley 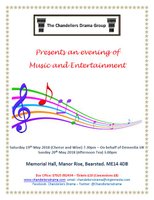 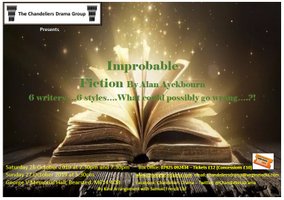 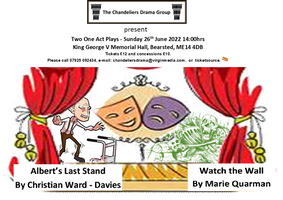